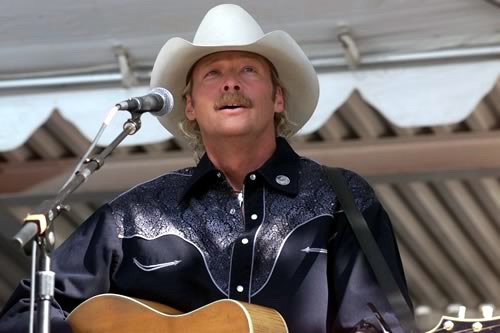 Over the years we’ve sold boats to and made connections with a variety of well-known people. So, we thought we’d share some of our stories with you. 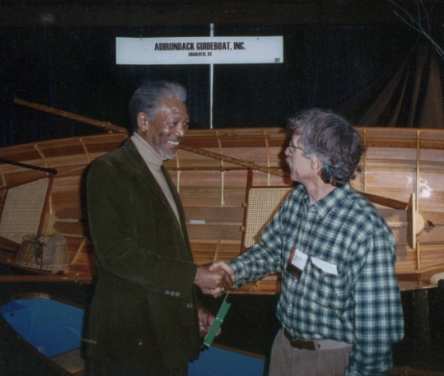 We didn’t actually sell a boat to Morgan Freeman, but this is such a cute story we couldn’t hold back. We had our boats at a craft show put on by the Philadelphia Museum of Art….it is one of America’s premier craft events…. merely being accepted to the show is a huge feather any craftsperson is proud to stick in their hat.

While standing in our booth, pressing the flesh and giving out literature, we looked up and saw Morgan Freeman walking down the aisle with a big smile on his face. He spent perhaps a half hour in our booth. He is an avid boater, a sailor, actually, on the Gulf Coast of Mississippi, and had a keen appreciation for our boats. At the end of the half hour he said, “I’d better be going….if my wife catches me looking at these boats …..She’ll kill me.”

So, we said our goodbye and shook hands all around. Morgan and Steve posed for a picture.
Then, perhaps 10 minutes later, Morgan came walking down the aisle with an attractive woman on his arm. David smiled at him, pointed at the woman and asked, “Is this your wife?”

He said that it was… and David started laughing. “Morgan,” he explained, “maybe a half hour before you came into our booth your wife spent 20 minutes visiting our boats. Then she said, “I’ve got to get out of here—if my husband catches me looking at your boats… he’ll kill me.” 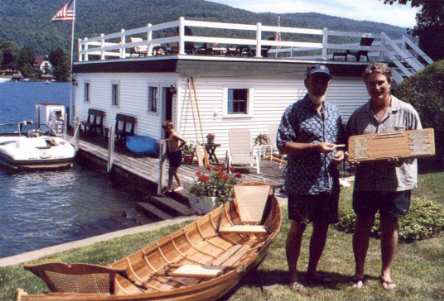 Brian Rooney is frequently seen on ABC’s nightly news as their Los Angeles correspondent. Brian has climbed a 180-foot redwood tree to interview a tree-sitter; he covered the tsunamis in Thailand and Indonesia, the uprising in Baghdad, wild-fires and earthquakes in California and the bombing in Oklahoma City. One afternoon Brian and his friend, Al Freihofer, stopped in at our shop.

They admired our boats and hoped one day to be able to get one.

Then, a few days later, Al called and said, “For as long as I can remember, Brian has wanted an Adirondack guideboat.”
We said, “Yes?”

Al said, “Well, 20 of us are going to pool our money and buy him one of your cedar boats for his 50th birthday. I’d like to place the order but I need you to promise that you’ll be able to deliver the boat on time. Also, you’ve got to promise to keep it an absolute secret.”

We promised and wrote up the order.

As the delivery date neared, many phone calls went back and forth, just to make sure all the stars were aligned and that everything was going to happen as planned. 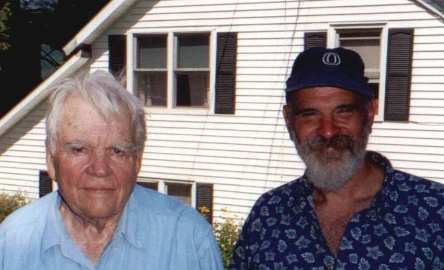 At the appointed hour, when Al and Brian’s families were in from California and Maryland, Brian and Al were sitting on a dock in their bathing suits, their feet dangling in Lake George. Brian said to Al, from out of nowhere, “You know, Al, the only way I’m ever going to get an Adirondack Guideboat is if I build one myself.”

At that precise instant, which no amount of planning could have orchestrated, David came rowing around the point with Cecile, Brian’s wife, in the stern and Brian’s two daughters sitting in the bow of Brian’s new boat .The children were singing “Happy Birthday,” Brian was utterly confused. (Part of the confusion came from the fact that Brian’s birthday isn’t till November and here we were in August.)

For perhaps two full minutes, Brian did not react. It was such a fantasy that he couldn’t believe it was coming true.

This is a photo of David and Brian…..Brian holding a plaque with all the names on it of those who contributed to his present.

And this is a photo of David and Brian’s dad, Andy Rooney.

John Cheffins’ name isn’t likely to be familiar to most people. He’s not a Brittney Spears or a Rod Stewart but he’s a certain kind of rock star to us. When he stopped in at our shop David asked him what kind of work he did. He said, “I work for Rolls-Royce.” 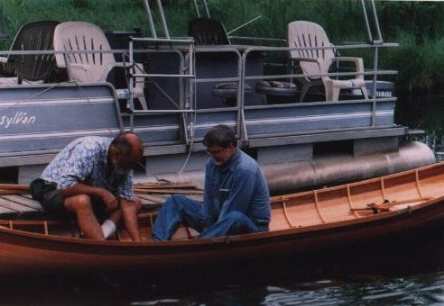 David said, “Really? What exactly do you do for them?”

It turns he’s the Chief Operating Officer for Rolls-Royce Aerospace….which is far more than the car company started by Charles Rolls and Henry Royce. The car company (which is no longer owned by Rolls but by BMW) gave birth to the much larger aerospace and power generating business. They are one of the premier builders of jet engines and satellites in the world. They build power plants for supertankers and aircraft carriers. When we mentioned the sale of this boat to Willem Lange, another of our customers, he said, “The next time you speak to Mr. Rolls, tell him that, as I am about to drift off to sleep when flying over the tundra, that I feel comforted, looking out the window and seeing his company’s RR logo on the jet’s engines.”

This is David giving John rowing instructions in his new boat.

Later, as they were loading John’s boat onto the car, John asked David: “How does the web work for you?”

David thought for a moment and then said, “Well, we caught you.”

John gave a big hearty laugh, “Yes,” he said, “you certainly did.” 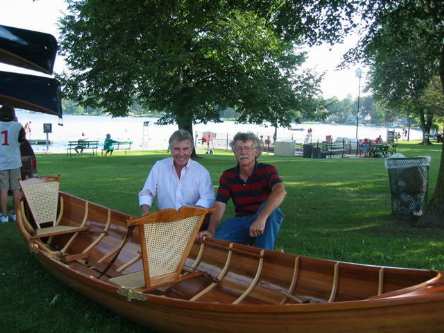 John is the host and producer of America’s Most Wanted. He met Steve at an Antique and Classic Boat Show in Skaneateles, in the Finger Lakes Region of Upstate New York. John admired the boat for a couple of years and finally said, “Could I put it in the water and try it out?”

Steve said, “Sure,” and that was that.

One summer we were doing the Maine Boats and Harbors Show in Rockland, Maine. This is one of our favorite shows. A particularly nice aspect of this show is….our booth is next to the boat launch and we can put people out on the water with just a few seconds notice. One year we were doing demos for three couples simultaneously. Dealing with one couple at a time is difficult enough….three couples was like herding butterflies. Finally, one of the women turned to another and said, “Well, we’re going to get a boat….what about you?” 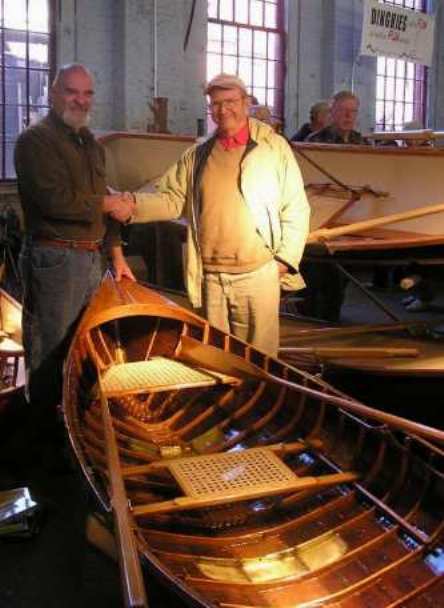 The second woman nodded her head and said, “Yes, absolutely.”

They both turned to the third woman (they were all strangers, mind you) and she said, “Of course.”

We could hardly believe what was happening. It was only when that last check was written that we accepted the fact, yes, we really did sell three boats at the same time.

When David looked down at the third check he saw that it was signed by “James Rockefeller.”

He looked up at Mr. Rockefeller and said, “You one of them Rockefellers?”

Mr. Rockefeller shook his head, no.

Mrs. Rockefeller, standing behind her husband, nodded her head, yes. (She also had a slightly exasperated expression on her face, as if to say, “He always says, no.”

They arranged for delivery and when David went to drop the boat off (a Vermont Fishing Dory) Mr. Rockefeller said, “I’ve got a project for you.”

Mr. Rockefeller said, “I think you’ll want this one.”

Mr. Rockefeller took David up to the attic and, sitting there on the floor was an absolutely beautiful….but horribly neglected and horribly repaired…. cedar guideboat. It was so small it was almost the size one would build for a child…..which it was. Mr. Rockefeller’s grandfather had it built for his daughter, Mr. Rockefeller’s mother, in 1908. 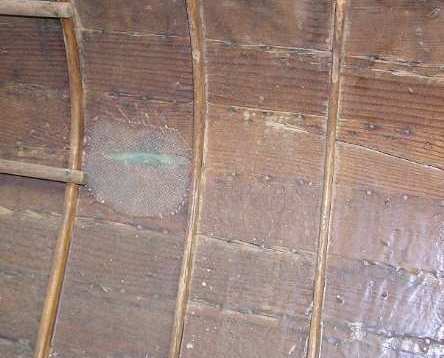 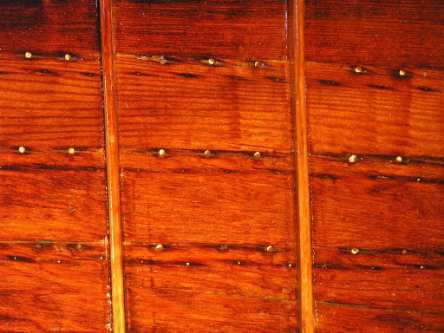 One last note….Mr. Rockefeller was right…. he did have a project in which David was interested.

[Mr. Rockefeller coming to the Maine Boatbuilder’s Show to collect his mother’s boat… which now resides in the Maine Museum of Transportation in Owl’s Head, Maine.] 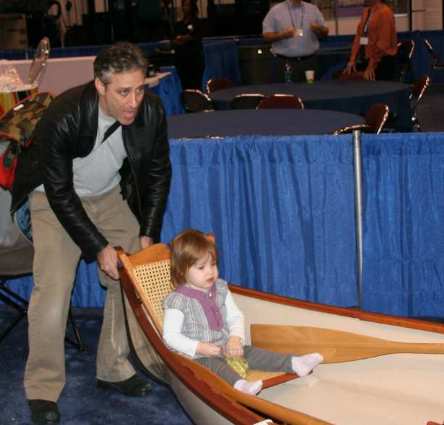 John and his family stopped into our booth at the New York National Boat Show. David asked if his little girl might like to take a ride in a boat, she nodded, yes, she would… and Dad and Dave played with the little girl in the boat for perhaps a half hour. 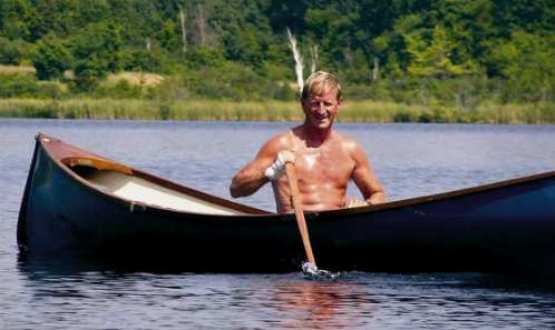 David Hellawell is the Head Coach of the British National Canoe Team. He drove past our shop on a vacation in America, saw a familiar shape in the yard, hit the brakes and made a U-turn. We spent an hour at the shop, talking boats… and then a couple of hours out on the water, rowing boats. David has an amazing set of boating experiences and he was delighted to add a new style boat to his vocabulary. 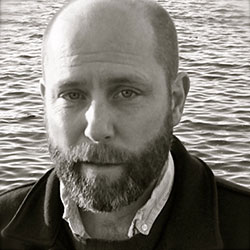 Bob Sullivan is an editor at Vogue. He is one of the most interesting and entertaining people we’ve ever met… (how he got to be an editor at Vogue, we don’t know. How he got his article on our boats published in Vogue… well, that’s also a mystery.

When last we heard from Bob, it was on NPR’s Fresh Air with Terri Gross. They were having their 25th anniversary program week and, as part of the celebration, each of the program’s producers selected his or her favorite segment. The guest on one of those most-favorite-segments was Bob Sullivan.

Cross Country: Fifteen Years and 90,000 Miles on the Roads and Interstates of America with Lewis and Clark, a lot of bad motels, a moving van, Emily Post, kids, and enough coffee to kill an elephant

A Whale Hunt: How a Native-American Village Did What No One Thought It Could

The Meadowlands: Wilderness Adventures at the Edge of a City

Rats: Observations on the History and Habitat of the City’s Most Unwanted Inhabitants

A customer with a Vermont Fishing Dory sent us in this story from Nashville: “I was out rowing my boat on the Cumberland River. I passed another boat and Alan Jackson leaned over the rail, studied my boat for a good long time and said: “Man….that’s a neat boat! Where’d you get it?”